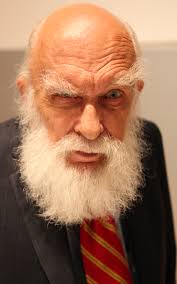 James Randi  is one of founders of the worldwide  Skeptics ( pseudo skeptic) organisation in which Tim Bolan describes  as ‘an organised hate group’.  James Randi is a Canadian American octogenarian ex   magician and self described master deceiver.  Randi is famous for discrediting  psychic powers and phenomena with his  most famous exposé being spoon bender  Uri Geller. It’s important to remember that Randi isn’t a true skeptic and has deceived his followers and media with this image.  He’s a close-minded individual following dogmatic ideological science. A short YouTube video provides the evidence:

CNBC Commentator: But if he [a psychic medium] said to me, does the day April 21st mean something to me, and I said that’s my birthday, I would consider that quite significant, wouldn’t you?

Randi: Well, significant if you want to read significance into it Charles.

Deflecting answers is a common strategy of the Skeptics.

Randi does all this discredithrough an organisation called the Committee for the Investigation of Claims of the Paranormal or CSICOP. This was headed by his business partner the late Paul Kurtz, the chairman of Prometheus Books, which publishes the works of James Randi and books about children’s sexual encounters with adults.

If you enter  website of Prometheus Books, and see the section on “Human Sexuality”, you’ll see titles explicitly or implicitly endorsing, promoting and justifying (with pseudo-scientific and “rationalistic” jargon) pornography, prostitution, paedophilia, sado-masochism, zoophilia, and other sexual aberrations and pervertions. . The original “Human Sexuality” section of Prometheus Books catalog was edited by CSICOP/CSI Fellow and International Academy of Humanism Secretariat Dr. Vern Bullough, who according to wikipedia was “a member of the editorial board of Paidika: The Journal of Paedophilia. Paidrika was an acaedemic publication that only publish peer reviewed studies advocating  paedophilia and many  pro-pedophile activists were involved.

The allegations that  “The Amazing Randi “is involved in pedophilia has been surfacing over the years Amazing indeed that there is a tape of him propositioning teenage boys for sex and boasting about his ‘nine inch willy’.

Much of Randis  bad press often magically disapears on the internet as many skeptic members are very computer savy. Since they are well organized to control health care articles on the Wikipedia website, and  have created a Search Engine Optimization (SEO) network designed to catapult their anti-good-health-care articles to the first page of Google and other Search Engines .

Randi is revered as a  cult leader internationally by skeptic devotees and has visited Australia many times.He has many celebrity friends including Penn and Teller and has even toured with Alice Cooper.  Here he is with Dick Smith who helped finance the Skeptics to start their evil operation in Australia. 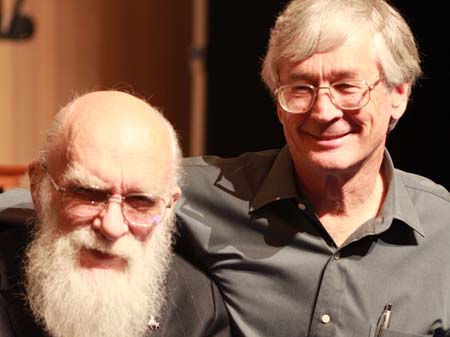 CNBC Commentator: But if he [a psychic medium] said to me, does the day April 21st mean something to me, and I said that’s my birthday, I would consider that quite significant, wouldn’t you?

Randi: Well, significant if you want to read significance into it Charles.

He’s  had courage to come out as gay at age 82 inspired by the Hollywood movie Milk but never spoke out for Gay rights during the time Harvey Milk was persecuted in 70s which makes him a conformist. James Randis’ homosexuality is  featured heavily in his vanity project “An Honest Liar ” Alex Jones hilariously calls James Randi a “Gay Wizard” and  says the documentary An Honest Liar mostly youtube clips for the first half . Alex Jones says its   “unwatchable” and “propoganda for the Communist Eugenics  Leftist agenda”   Here is Alex Jones response